Madonna Has Guy In Tears 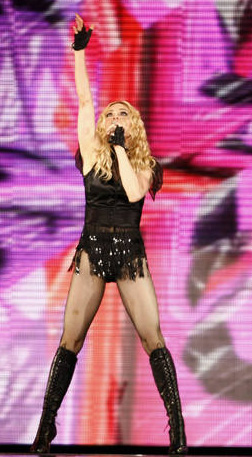 Madonna is said to be bent on hurting Guy Ritchie and in her latest move, she has their son Rocco wearing a New York Yankee shirt.  Madonna is rumored to be involved with the team’s player, Alex Rodriguez and he is said to have played a major role in the couple’s break up. Ritchie is so upset he is reportedly in tears.

Guy Ritchie is “in pieces” after seeing a photo of his son Rocco in a T-shirt supporting Alex Rodriguez’s New York Yankees baseball team, a source tells Usmagazine.com.

The 8-year-old was photographed sporting the shirt Monday in New York City.

“He’s actually been crying over it,” says the source on the set of Ritchie’s upcoming drama Sherlock Holmes. “He’s in a terrible state but is doing his best to be on form at work.”

The insider tells Us Ritchie “cannot believe” Madonna would let their son wear the shirt, given the fact that her close relationship with the slugger played a role in their contentious divorce.

“He said she is the ‘lowest of the low’ and is even more determined to fight for his side now,” the source says.

“Madonna has hit the wrong button,” adds the insider. “He won’t sink to her level, but she better watch out because it seems he has a lot on her.”

The two have yet to reach a financial settlement over their $525 million fortune or reach a custody arrangement for Rocco, their only biological child.