A-Rod: Madonna Is My Friend 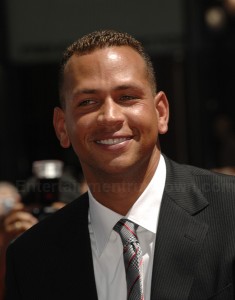 Yankees star Alex Rodriguez commented for the first time on his relationship with Madonna.

Asked if there is any romance between them at all, Rodriguez reiterates, “We’re friends – that’s it.”

Are the two carrying on a romantic relationship and flying around the country in order to spend time together? “I can tell you this,” Rodriguez tells People Magazine, “I have never been on a plane with her.”

On attending her concerts: “I’ve been to two [of her] concerts, yet I’ve read that I went to 20. I’ve also read that we were buying an apartment together. That is absolutely ridiculous and not true.”

“You have to have a sense of humor when it comes to this stuff,” Rodriguez adds.

Asked did he ever spend the night at Madonna’s home? Rodriguez laughed: “If I answered every rumor we’d be here for three weeks.”

A source close to Rodriguez tells People that reports of his spending the night with Madonna are “completely, unequivocably false.”

On spending time with his children and Cynthia: “I see my children, honestly, seven days a week, which has been great. We both have a lot of respect for each other and she’s a great lady.”

As for Madonna: “I have a lot of respect for her,” he says. “She’s very committed to making the world a better place. She’s had an amazing career, and we’re friends. That’s it.”

Rodriquez, who is focused on children’s charity, ran a baseball clinic while in Mexico City last weekend.

“When you’re among 200 kids and teaching the game of baseball it gives you an amazing feeling,” he says, “just that you may inspire kids to reach their goals, whether it’s baseball or whatever their goals might be.”

Helping children is something he and Madonna have in common – and why he is supporter of Madonna’s Raising Malawi charity. “I initially knew nothing about her charity,” Rodriguez says. But soon found that “we shared a lot of the same commitments toward helping children. I was very moved by the whole thing. I saw the documentary and it was very inspiring and informative. I saw an opportunity to help and I jumped at that.”

Rodriguez three other philanthropic efforts recently: He’s funding the completion of a Pediatric Outpatient Unit at Bronx-Lebanon Hospital Center in New York City; funding a Community DentCare Network at Columbia University College of Dental Medicine (to provide preventative dental services for kids); and completing a new learning center at the Boys and Girls Club in Miami that he frequented as a child.