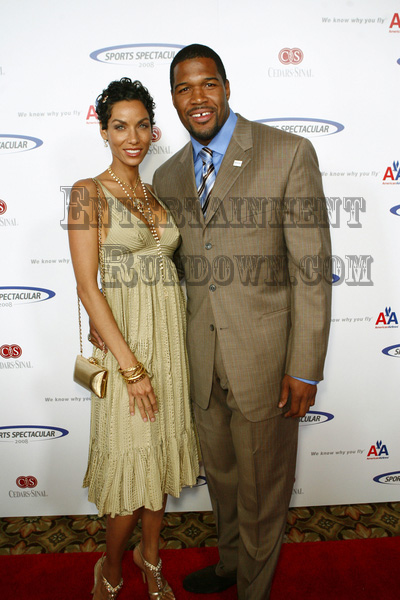 Michael Strahan’s side gig is apparently working as a private eye, who knew?

Michael has been dating Nicole Murphy, Eddie Murphy’s ex, and decided he needed to track her movements so he put a tracking device in her car and reportedly went off when she found it.

Apparently this is not the first time Michael has utilized his investigative skills.

His ex-wife, Jean, accused him of using high-tech spyware to tap her phone at their New Jersey home during the 2006 divorce. She said he’d installed a secret video system to record her sister undressing. Oh my.

Nicole reportedly had a thing going with Universal Records A&R exec Demetrius Spencer at the same time she was dating Michael.

She would use “business trips” as an excuse to leave town then she would jet off to exotic getaways in the Caribbean and Mexico with Demetrius.  This has been going on for a year.

For months, the couple had exchanged e-mails, professing their love for each other and in one of the notes Nicole told Demetrius she planned to let Michael know about their relationship.

She got suspicious that Michael was checking up on her ad there were “too many instances where he knew where she was,” said a source.

“This is the second tracking device he’s had put in her car,” one source said.

“This one was found behind the front dashboard.”

While the tracker was being removed Michael allegedly busted up into the garage and was removed “yelling and screaming,” a source said.

He supposedly walked over to car and ripped off the exposed tracking device and stormed out of the shop.

Nicole and Demetrius has since broke up but remain friends, said one source.

Nicole is reluctant to split with Michael because he’d grown close to her kids.