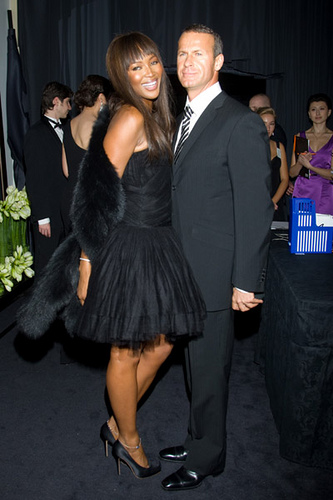 Naomi Campbell has been dating billionaire Vladislav Doronin for almost a year. Word is they were on the verge of getting engaged, well dude is already married.

Friends of Naomi seriously thought oligarch Vladislav Doronin was the man she’d finally wed and have babies with.

The pair have DATED since last May, Naomi has PLAYED ‘Moscow housewife’ at one of Vlad’s homes and the 46-year-old tycoon himself TALKED about buying her an engagement ring.

But, after 21 years wed, his furious hush- hush missus Ekaterina —mother of his 12-year- old daughter—has told friends she will NOT ask for a divorce and intends to keep him.

“This is just a ridiculous affair,” the stunning blonde confided to a close pal. “Vladislav is married to ME and we are still a couple.

“Naomi is deluding herself if she thinks she can take my husband.

“But it is adultery and Naomi is flaunting it. It is sick and it is embarrassing.

“Vladimir and I are not even legally separated. How can she possibly think she can get engaged to my husband when he is married to somebody else?”

Ekaterina, 44 and known as Katia, has kept a dignified public silence about her husband’s fling since it started at last year’s Cannes Film Festival.

She hoped property entrepreneur Vladislav would become bored with his 38-year-old catwalk mistress.

But now Naomi has moved into one of their homes and is being dubbed his ‘Russian housewife’—and Katia is fuming. She told her friend: “That is the final straw. Naomi has got this so wrong. She is kidding herself. I think my husband has been enjoying the fame, glory and showbiz razzmatazz of meeting all the big stars. And it’s good for business.

“He is planning several large new city complexes in the financial area of Moscow and Naomi’s friends are useful.

“She is trying to catch the last train before she is 40 so she can have children—but that train is my husband. And our families are disgusted and embarrassed.

“Naomi has a history of violence and drug abuse, she is really socially beneath us. It is not the done thing.

“Family members and friends from all over the world have been phoning me asking what on earth is going on.

“We both come from good families and our families are intertwined which makes it even worse.
Money

“Naomi is maybe having her head turned by Vladimir’s money but she is showing a lack of respect for our family.

“In the past he has never liked any publicity. Flaunting yourself in public is not the done thing in our society.

“I have been with Vladimir since I was 16 years old, you can’t throw that away overnight.

“His relatives are horrified at how he has flaunted Naomi. They told him off. They’re stronger than me.”

Naomi and Vlad have partied all over the world since meeting on the French Riviera.

In July the model threw a bash in St Tropez  to introduce her new lover to friends.

One guest, Brazilian writer Bruno Astuto, revealed: “She said it was love at first sight and he is completely in love with her.

“He thinks she’s a goddess and Naomi believes she finally has found the right man. . . we hope they will announce their engagement.”

In September Vladislav gushed: “Naomi is wonderful. Will I put a ring on her finger? Maybe very soon.”

Weeks later Naomi was seen wearing an emerald and diamond ring as the pair kissed and cuddled like newlyweds.

Now Naomi is spending an increasing amount of time in Vlad’s Moscow penthouse and his out-of-town mansion.

But at the family’s palatial London home in Mayfair long-suffering Katia has finally had enough.

She lives well—despite plunging share prices and the falling value of the rouble Doronin is still said to be worth £1.4 billion including a £69 million property portfolio.

In London Katia spends her days shopping at top designer fashion houses, enjoying £250 hairdos and dining with her friends.

A chauffeured Daimler sits outside her house, day and night, ready to take her anywhere she fancies.

Her wealth means she and her daughter are constantly guarded by security every second of every day.

Katia wants for nothing—apart from her husband.

“I have ignored all this in the past because I know boys will be boys. He has bought Naomi gifts, he has bought other women gifts.

“I don’t want to read in the papers every day about them gallivanting around the world.
Loud

“This is a woman from a different lifestyle, she is loud and showbizzy.

“Vladimir is a good man. He is tough in business, but with women he is soft and likes buying expensive presents.

“I like to think to myself that Naomi bought that ring herself but in my heart I know he has bought rings for other women.

“When he mentions Naomi I don’t react, that would be a weak thing to do.

“Maybe after all his hard work my husband wants some fun, maybe it will be good for business. But enough is enough.

“He is my husband. He is wealthy and generous but not stupid.

“Naomi is deceiving herself if she thinks he will be with her. As a wife of dignity I refuse to be humiliated.

“I would never cause a public scene or any embarrassment but Naomi has overstepped the line.”

When approached by the News of the World Ekaterina said: “I don’t have to explain myself and I don’t give interviews.” – Source

What kind of marriage do these two have? It is okay with her as long as he doesn’t flaunt his women. I’m giving her the side eye on this.