Beenie Man Embarrasses Rihanna To Join Him On Stage 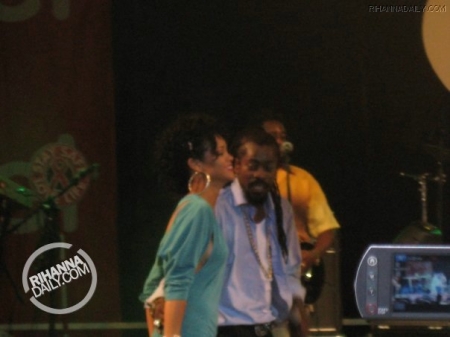 Beenie Man called Rihanna on stage Sunday when he performed at a reggae show in Barbados and  some are calling what he did embarrassing to Rihanna.

For the whole day, Beenie breezing up in the Prime Minister’s VVIP stand, drinking Hennesy straight from the bottle, bun’ing a lil weed, going down every now and then to hug up the crowd just on the outside of the stand and clearly fulljoying himself.

Towards the late afternoon, Rihanna, who has been in Barbados for the past week or so, came into the stand as well and was just chilling.

Anyhow, when Beenie touch the stage now at about 7:30 and gave a generally decent performance – certainly the crowd was with him.

Thennnn… he start calling for Rihanna to “report back stage immediately”.

And then he start talking up a set of things about the infamous beating incident between her and Chris Brown, asking the crowd if they didn’t think it was ”ah eediat ting weh Chris do” while singing a very off-key version of  the hook to ‘Umbrella’. You could hear a collective ‘ooooohhhh!’ as the crowd sucked in its breath when he said it.

Honestly, you could tell that he was well-meaning, because he was definitely on her side and he was trying to hype up the crowd against Chris Brown but jeez … you feel the girl really want to be reminded of that incident in front of tens of thousands of Bajans?

Said I to myself ‘well no way she coming up on stage now!’

But Beenie kept calling for her and singing ‘Umbrella’ and lo and behold, she actually came up on the stage. Then he start singing his version of Umbrella , part of which went “Mi nuh have no fancy car/But mi neva give you no scar”.

I. was. shame. for de girl. Everyone was shame because the crowd didn’t really hype up and carry on the way they had been earlier when he was just performing all his hits. I just wanted it to end.

You could tell she was a little shame too because she was waving an Ethiopian flag at first and then she put her arm over her face but kudos to her, she mostly kept her game face on while he went on and on bout the incident and smiled and waved to his singing. 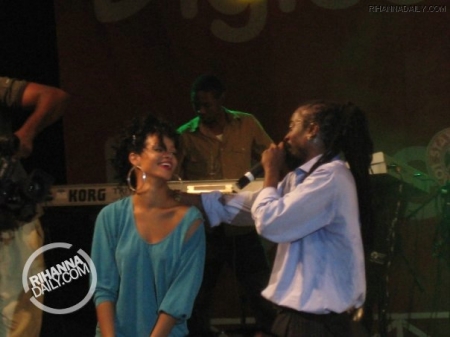 Like I say, better than me because no way I was coming up on stage and worse, staying on while he reminded everyone of something she is clearly trying to put behind her. Obviously it’s hard to put behind her when it caused a global stir but to have it brought up so, right in front your face and on stage in front of thousands… that rough still.

Anyhow, after a little bit she waved to the crowd and came off stage and you would think it would done there. But Beenie wasn’t done. He told her that Chris fi get vex when he see the pictures of him (Beenie) and Rihanna hugging up on stage because he is the ‘girls dem suga’ and anything the sugar touch get sticky and that when Chris see it he must get Heart Attack and then he went into that song.

And the crowd hyped up for it and thank god, that was the last of it. – Source

It does sound embarrassing, Rihanna is a brave girl to have gotten on stage. She probably figured it would shut him up if she just got on the stage.

Sidenote: Beenie needs to stop calling himself the “girls dem suga”, he’s got to be about 50 years old. 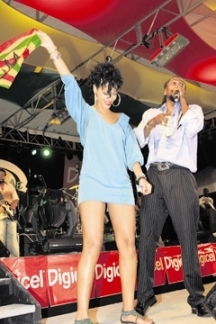