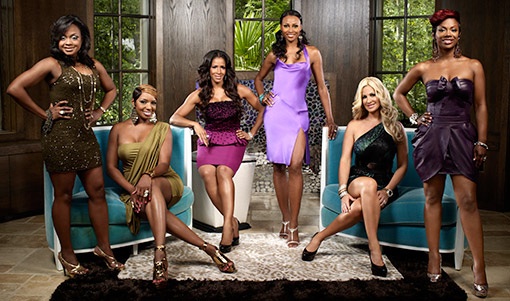 The Real Housewives of Atlanta returns for the third season in October. Kandi, Kim, NeNe and Sheree have been busy pursuing their dreams and striving to maintain their relationships. Coupled with the additions of model Cynthia Bailey and entertainment lawyer Phaedra Parks, this is a season not to miss. The season will also see the departure of Lisa Wu Hartwell who will only appear in three episodes. Check out the sneak peek after the jump.

Storylines for the returning cast:

NeNe Leakes – This season NeNe is facing some of her biggest challenges yet. Once her rock, NeNe’s husband Gregg is no longer working and has gone behind her back to do some “business deals.” With her marriage on the line, NeNe is pursuing her independence more than ever. She lands a position as an entertainment reporter for the local news channel, seeking to transform herself into a career woman, while still keeping an eye on her sons.

Kim Zolciak -Kim is working towards taking her music career to the next level and turns to Kandi to help increase her song repertoire. After learning to work together, Kim accepts Kandi’s invitation to open for her summer promo tour, only to find that it’s much harder work than she ever imagined. Even more complicated is balancing her rollercoaster relationships.

Kandi Burruss – Kandi’s world was turned upside down last year with the death of her former fiancé. Working to rebuild, Kandi is starting to date again and is back in touch with her father who she learns is sick with cancer. After her Capitol Records deal fell through last year, Kandi has signed with a new label and is putting together a new album with songs heavily inspired by AJ.

Sheree Whitfield – Sheree has discovered her next passion -acting. Her sites are set on winning an Oscar one day and so she begins working with an acting coach and auditioning for roles in Atlanta. With her revamped attitude, Sheree begins dating a doctor and with encouragement from her friends, moves forward taking risks on her career.

Cynthia resides in Atlanta with her 10-year old daughter, Noelle. The Alabama-born beauty moved to New York City 18 years ago to pursue her dream of modeling. Her very first booking was the cover of Essence, but that was only the beginning. From major fashion features to the runways of Paris and Milan Fashion Weeks and from staring in a movie opposite Sandra Bernhardt to a guest role on the Cosby Show, Cynthia has had an enviable career path. Cynthia joins the Housewives at a pivotal time in her relationship with her boyfriend of three years, Peter Thomas. He has issued her an ultimatum, and though Cynthia has always been independent and financially comfortable, she must come to terms with her marriage hang-ups or risk losing him for good. Already a close friend of Nene’s, their friendship deepens as together they struggle through relationship issues with the men in their lives.

Phaedra is a celebrated entertainment attorney who lives in the historic Vinings area. She is the Managing Partner of The Parks Group, P.C., an Atlanta based boutique law firm that caters nationally to entertainers and athletes. An active member of the community, Phaedra, a self-proclaimed “Southern Belle,” sits on numerous boards and is involved in multiple charities. A friend of Dwight and Kandi’s, Phaedra arrives on the Housewives scene under scrutiny. Phaedra’s marriage to her younger husband, Apollo, is the subject of much gossip because of his stint in prison for a “white collar crime.” She is expecting her first child with Apollo and has thrown herself into planning the perfect southern baby shower.