R. Kelly Storms Out Of Interview After Questions Over Past Allegations 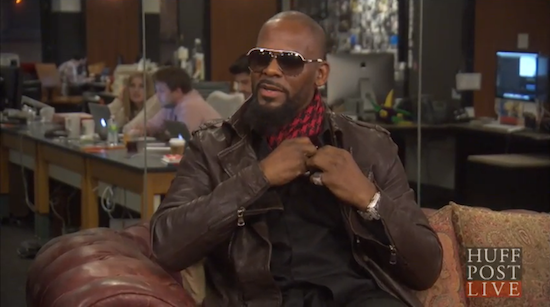 R. Kelly sat down for an interview with HuffPost Live on Monday and was faced with questions he didn’t like. Caroline Modarressy-Tehrani asked the singer about how his past sexual abuse allegations might be affecting sales of his music. “This interview is over,” he said, before stomping off.

Things took a bad turn when Modarressy-Tehrani read him a tweet from a conflicted fan. “Would I let R. Kelly babysit my daughter? F*ck no,” the Tweet read.

“I say f*ck that…I get nothing but love, unless all those people are tricking me and acting when they see me in concert…I don’t know where you’re getting your information from, but I am a very successful man. I’m a very talented person.”

As the interviewer persisted in her line of questioning, he said: “I did not come here to be interrogated. I didn’t come here for a deposition. Do you know what a deposition is? … This is a deposition … This is about disrespect. If you don’t think you’re disrespecting me than that’s just the level of your intelligence, not mine.”

He left the interview after telling Modarressy-Tehrani he loves everyone, including her, and that she is beautiful.

The full interview below: